Climate change is causing the sea to rise up and swallow our living space, from coastal territories to entire nations in the middle of the ocean. Even at the most conservative estimates, we’re in trouble, and then we have to contend with the fact that the world’s most powerful nation is flirting with the idea of pulling out of the Paris agreement.

Although plenty of the American public – a clear majority – support staying in the groundbreaking climate pact, those that don’t probably have not yet grasped the magnitude of how climate change will affect them. Well, a brand new study published in Nature Climate Change has come along with a rather visceral, gut-punch of a fact: Based on current rates of sea level rise (SLR), 13.1 million Americans will lose their homes by 2100.

Previous estimates of SLR-induced migration have hit on figures of around 2-2.5 million, and these focused on major coastal cities worldwide, not just on the US. This new paper, however, comes up with a considerably higher figure, and it’s all based on an entirely reasonable projection that SLR around the US will average at around 1.8 meters (almost 6 feet) by the end of the century.

Environmental refugees are already emerging around the world, but most people will likely only associate the word “refugee” with conflict or economic woes. In this case, however, Americans themselves living in coastal cities will become the new refugees, fleeing further inland as their homes fall into the rising tides. 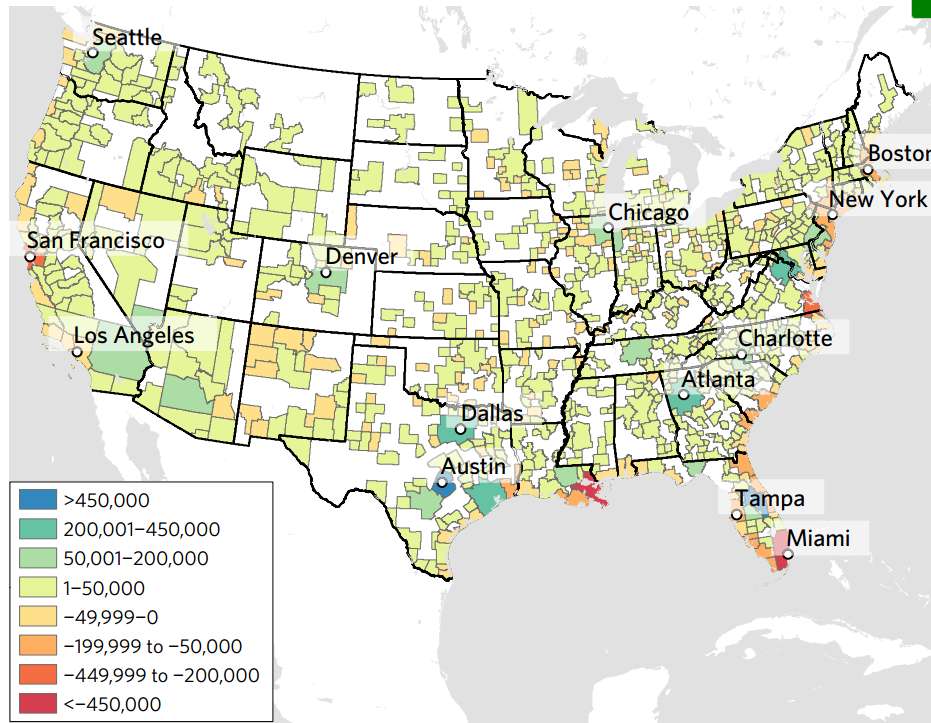 The US by 2100, showing net migration numbers to and from major metropolitan areas. Hauer/Nature Climate Change

“It is generally understood that SLR of 1–2 m could lead to widespread human migration as residents of highly vulnerable coastal communities look to escape rising water levels,” Mathew Hauer, a climate change and migration expert at the University of Georgia, notes in this study.

“With up to 180 million people directly at risk to SLR in the world and over 1 billion living in the lower-elevation coastal zone, understanding the ramifications of these potential migrants on destination communities is a priority for climate change research.”

In order to reach the 13.1 million figure, Hauer plugged in SLR projections to a mathematical model that predicted US population growth and movement based on 1940-2010 levels.

Although it’s difficult to say where exactly the American refugees will head, it’s clear that cities like Miami, New Orleans, New York, and San Francisco will be in deep trouble. Consequently, inland cities like Dallas, Austin, and Chicago would see a huge influx of migrants.

Alongside this slow-drip migration event, Hauer also notes that it would cost the US $1.1 trillion by 2100 in infrastructural retrofitting. All in all, a great change is coming – and it looks like top US officials are willing to do absolutely nothing at all to stop it.