Gwyneth Paltrow and her publication, Goop, have been sharing her celebrity lifestyle since the site launched in 2008. It's jealousy-inducing for some, while others have complained that it's totally "out of touch."

But when it comes to health tips, the site is full of dodgy information, with unfounded warnings about things that are safe — like bras and sunscreen — and zealous promotion of things with little-to-no proven benefits — like cleanses and vaginal steaming. Some of the alternative medicine practices on the site could even be dangerous.

In a statement provided to Business Insider, Goop said that readers should consult their doctors before "making any changes in [their] medical routine." A similar warning appears at the very bottom of many posts, clarifying that they intend to "highlight alternative studies" and that "the views of the author ... do not necessarily represent the views of Goop."

"Goop regularly shares perspectives and insights from a range of experts in health, wellness, and other fields," Goop said in the statement. "The thoughts shared ... stimulate discussion and conversation on a variety of topics for the consideration of our readers."

Yet some of these "insights" are scientifically indefensible.

We looked into the facts behind some of Goop's most dubious claims.

Myth No. 1: Getting stung by bees can safely reduce inflammation or heal an old injury.

Paltrow herself recently admitted to the New York Times that she is generally "open to anything." This now includes being stung by bees — on purpose.

"I've been stung by bees. It's a thousands of years old treatment called apitherapy," she told the Times. "People use it to get rid of inflammation and scarring. It's actually pretty incredible if you research it. But, man, it's painful."

It's painful because people get stung by live bees during an apitherapy session. The practice can also involve merely using bee venom, but that stings, too.

Paltrow also wrote in a post on Goop that she received "'bee venom therapy' for an old injury and it disappeared." The rest of the article recommends various products and practices having to do with bees, including apitherapy.

No randomized, controlled trials (the gold standard of scientific studies) have shown apitherapy has any health benefits in humans. This lack of evidence is why Dr. Clay Jackson, vice president of the board of the American Academy of Pain Management, told Business Insider that people shouldn't try apitherapy as their first option for problems without consulting their doctor.

"Many people are allergic to bee venom and also there have been reported side effects, such as hemorrhagic strokes," Jackson said. "Some people mistakenly assume that because something is natural, it has no side effects, and that is not the case."

Another false claim on Goop — thatunderwire bras could be a cause of breast cancer — has been repeatedly refuted by top experts and organizations. The author of the post, Habib Sadeghi, is not an oncologist but a Doctor of Osteopathic Medicine at an integrative health center in Los Angeles. (He's previously come under fire for a Goop essay advancing the idea that negative words can change the physical structure of water.)

As the nonprofit BreastCancer.org points out on its website, only one scientific study has specifically looked at the possible connection. Its title, in part? "Bra Wearing Not Associated with Breast Cancer Risk."

The American Cancer Society has an entire article dedicated to disproving this claim.

According to this study, there was no increased risk of breast cancer due to wearing a bra, a result that, to breast cancer specialists, was about as surprising as the observation that the sun rises in the east and sets in the west, water is wet, and gasoline flammable.

Myth No. 3: Detoxing is important to get chemicals out of your body.

A Goop post titled, "Does Detoxing Really Work?" is an interview with environmentalist Rick Smith, who does not have medical training. He purports that we need to cleanse our bodies in order to rid them of "post-1950 synthetic toxins that we ingest, breathe, and absorb through our skin, on a daily basis."

The Goop staff and Paltrow go on a group detox every January, during which they drink tons of lemon water, use infrared saunas, and "just say no to: alcohol, caffeine, added sugar, gluten, dairy, soy, corn, and nightshades (white, blue, red, and yellow potatoes, tomatoes, eggplant)."

Eating healthy is great, and no one will harm themselves by removing the foods suggested by the Goop cleanse from their diets. But the idea that detoxes or cleanses remove toxins from your body borders on nonsense. The whole concept of cleanses is unsupported by research and does not match up with what we know about the human body.

Toxins do not "build up" inside you (with the exception of actual poisoning, of course). "The body is constantly filtering the toxins in alcohol, food and medicines, not storing them," dietitian Maria Adams told NPR, in a great piece debunking detoxing. "So they're not going to build up."

Why? Because your body has "its own amazing detoxification systems: the liver and the kidneys," Ranit Mishori, a Georgetown University School of Medicine doctor, told NPR. "Unless there's a blockage in one of these organs that do it day and night, there's absolutely no need to help the body get rid of toxins."

Indeed, a review of the research on detox diets last year concluded that "there is no compelling evidence to support the use of detox diets for weight management or toxin elimination." 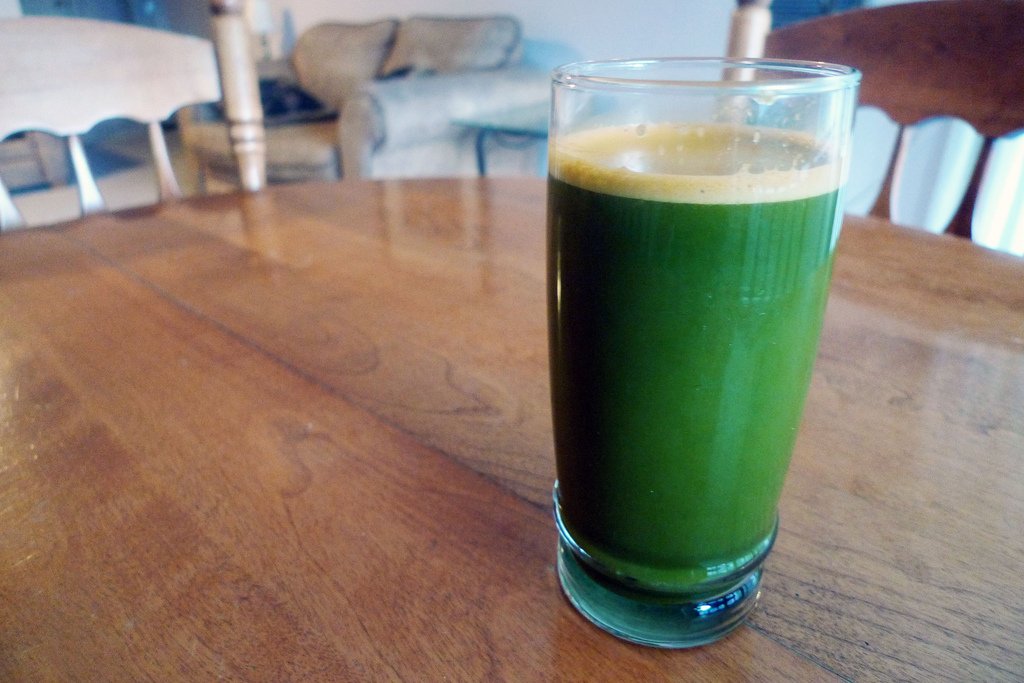 Myth No. 4: A vaginal steam with mugwort will balance your female hormone levels.

A Goop guide to spas raved about a "V-Steam." It explained the experience thusly:

You sit on what is essentially a mini-throne, and a combination of infrared and mugwort steam cleanses your uterus, et al. It is an energetic release—not just a steam douche—that balances female hormone levels.

But ob-gyn Dr. Draion Burch told LiveScience that scientific evidence doesn't back this practice up. He even said that it could cause burns or bacterial infections.

Dr. Jen Gunter, another gynecologist, alsoadvised people against the Goop-recommended vaginal steaming, warning that there is a fragile ecosystem within the vagina that can easily be disturbed. She also pointed out that "balancing hormones ... means nothing medical," and that, in any case, "steaming your vagina with wormwood or mugwort will not do anything to hormones because these plants are not hormones."

Finally, Dr. Gunter noted, "the people who push V-steams also need a little anatomy lesson ... steam isn’t going to get into your uterus from your vagina unless you are using an attachment with some kind of pressure and MOST DEFINITELY NEVER EVER DO THAT."

Myth No. 5: Jumping on a trampoline is vastly better for your health than running.

A Goop post about rebounding, which is a fancy term for doing exercise on a trampoline, cited a study that reportedly found the practice was much more beneficial for your heart than running.

"NASA has done research on rebounding and found that it is 68 percent more effective for cardiovascular health and fat burning than running!" the story claimed.

We did some digging and found the study. It's from 1980. The researchers, who were indeed working with NASA, looked at the differences between oxygen uptake and body acceleration when running vs. jumping.

Their goal was to figure out which one might be better for astronauts dealing with the "deconditioning" that happens when they're weightless. (Your average gym rat, meanwhile, is probably not trying to find the best workout for zero gravity, so the results are not entirely relevant.)

Furthermore, the study only had eight participants, who were all male. That's too small and homogeneous of a sample to prove much of anything.

The scientists note in their paper that "heart rate and oxygen uptake ranged from resting to nearly maximal levels, regardless of the type of exercise." In other words: get moving, any which way, and you can reap the heart-healthy benefits of exercise.

Myth No. 6: Chemical-based sunscreens are bad for you, and you should only use mineral-based ones.

We don't recommend spraying it directly onto your face, however. Spritz it in your hands first.Darron Cummings/AP Photo

Goop recommends sticking only to "clean," non-toxic sunscreens. In explaining "Why chemical sunscreens aren't great," Goop says, "Chemical sunscreens employ a potent combination of chemicals like Oxybenzone, Octinoxate (Octylmethoxycinnamate), Homosalate, Octisalate, Octocrylene, and Avobenzone, many of which are hormone and endocrine disruptors."

Scared yet? In fact, clinical studies have found that these ingredients are not harmful to human health.

In a 2011 study on "sunscreen controversies," a team of doctors from Memorial Sloan-Kettering did a thorough review of previous research and found that the only data showing these ingredients were questionable came from animal studies, usually with extremely high doses — not studies in humans, or with doses typically used in humans.

"None of the data published to date conclusively demonstrate adverse effects on the health of humans from the use of sunscreens," the authors concluded. The study noted in particular that oxybenzone hasn't shown hormone disruption in humans.

A follow-up study from 2014 came to the same conclusion: sunscreen ingredients aren't harmful to humans, and applying sunblock to prevent skin cancer is extremely important. You don't need "clean" sunscreens to get these benefits.

Myth No. 7: Colon cleansing is a necessary way to remove toxins from your body.

Colon cleansing is another practice that Goop swears by, particularly in this post that includes an interview with Dr. Alejandro Junger, who developed the Clean Program cleanse. "A colonic helps with the elimination of the waste that is transiting the colon on its way out," Junger says.

When patients are preparing for colonoscopies, which screen for colon cancer, they "clean out" their colon by following a liquid diet, but there are not health benefits to that — it's just so the doctor can see your colon better.

Colonics as "cleanses" — in which liquid is shot through a tube in the rectum into the colon — aren't necessary and carry serious risks, according to Mayo Clinic physician Dr. Michael Picco.

"Your digestive system and bowel already eliminate waste material and bacteria from your body," he wrote for the Mayo Clinic. "[Proponents] believe that colon cleansing improves health by removing toxins, boosting your energy and enhancing your immune system. However, there's no evidence that colon cleansing produces these effects. And colon cleansing can sometimes be harmful."

The side effects, Picco writes, can include dehydration, infections, vomiting, and even bowel perforations.

As a research article in a journal for family doctors noted: "Colon cleansing has no proven benefits and many adverse effects."

This is an updated version of a story first published in October 2015.