The European Space Agency (ESA) has picked a second potential landing site for its ExoMars rover, which will launch in July 2020 and arrive at Mars in early 2021.

The newly picked site is called Mawrth Vallis, a fascinating region that may reveal the early evolution of the planet. It appears to have river channels carved by water, and clay deposits there may have preserved evidence of past microbial life.

Mawrth Vallis joins Oxia Planum, chosen in 2015, as one of the two possible landing sites for the rover. It beat off competition from Aram Dorsum, found close to the Martian equator, and also thought to have been the site of water activity early in the history of Mars. It lost out after a two-day meeting of experts earlier this week as part of the Landing Site Selection Working Group.

“While all three sites under discussion would give us excellent opportunities to look for signatures of ancient biomarkers and gain new insights into the planet’s wetter past, we can only carry two sites forward for further detailed analysis,” said Jorge Vago, ESA’s ExoMars rover project scientist, in a statement.

The two sites are separated by a few hundred kilometers just north of the equator. Mawrth Vallis not only shows signs of river channels, but even “localised ponds” according to ESA. Oxia Planum, meanwhile, appears to have clay-rich minerals that formed in wet conditions about 3.9 billion years ago. 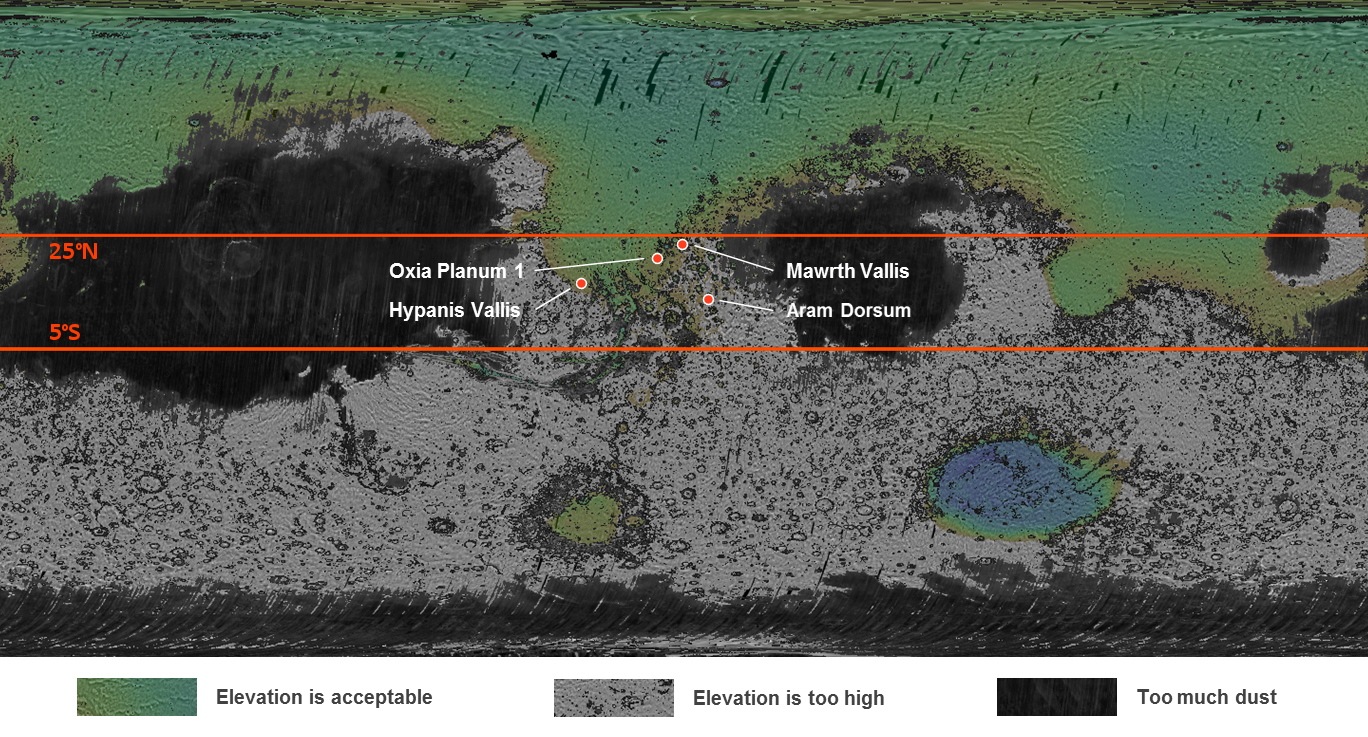 The final decision on which site to visit will be made one year before ExoMars launches, so some time in mid-2019. Both are found in relatively low-lying land near the equator, a necessary feature that will ensure there is enough atmosphere to slow the rover as it parachutes to the surface.

The rover is the second part of the overall ExoMars mission, alongside a stationary surface science platform that will remain at the landing site. The first part saw the Trace Gas Orbiter enter orbit around Mars in 2016, which will begin studying gases in the Martian atmosphere later this year. It carried with it the Schiaparelli lander, which crashed into the surface in October.

Once on the surface, the rover will perform one of the most extensive searches for past and present life on Mars to date. It will use a suite of instruments to study the surface, including a drill that will go up to 2 meters (6.5 feet) into the surface to find hints of underground water, and maybe signs of life.

If all goes to plan, the rover will be joined by NASA’s 2020 Mars rover on the surface. Opportunity and Curiosity may also still be running then, giving us four operational robots on the surface of Mars.