Empty space is a lot less empty than you may expect, as it is inhabited by a flurry of virtual particles fluctuating in and out of existence. In the 1930s, it was predicted that when these particles are within an intense magnetic field, they interact with light in a very specific way. This phenomenon has finally been observed in nature.

An international team of researchers used the Very Large Telescope in Chile to observe light from the neutron star RX J1856.5-3754. In doing so, they witnessed how the light was affected by the strongly magnetized vacuum – an important test for quantum electrodynamics (QED), the theory that describes how light and matter interact.

“According to QED, a highly magnetized vacuum behaves as a prism for the propagation of light, an effect known as vacuum birefringence,” team leader Roberto Mignani, from INAF Milan and the University of Zielona Gora, said in a statement.

RX J1856.5-3754 is located about 400 light-years from Earth and has an inferred magnetic field of about 10 billion Gauss, about 20 billion times Earth’s own.

“This effect can be detected only in the presence of enormously strong magnetic fields, such as those around neutron stars," added co-author Roberto Turolla, from the University of Padua. "This shows, once more, that neutron stars are invaluable laboratories in which to study the fundamental laws of nature." 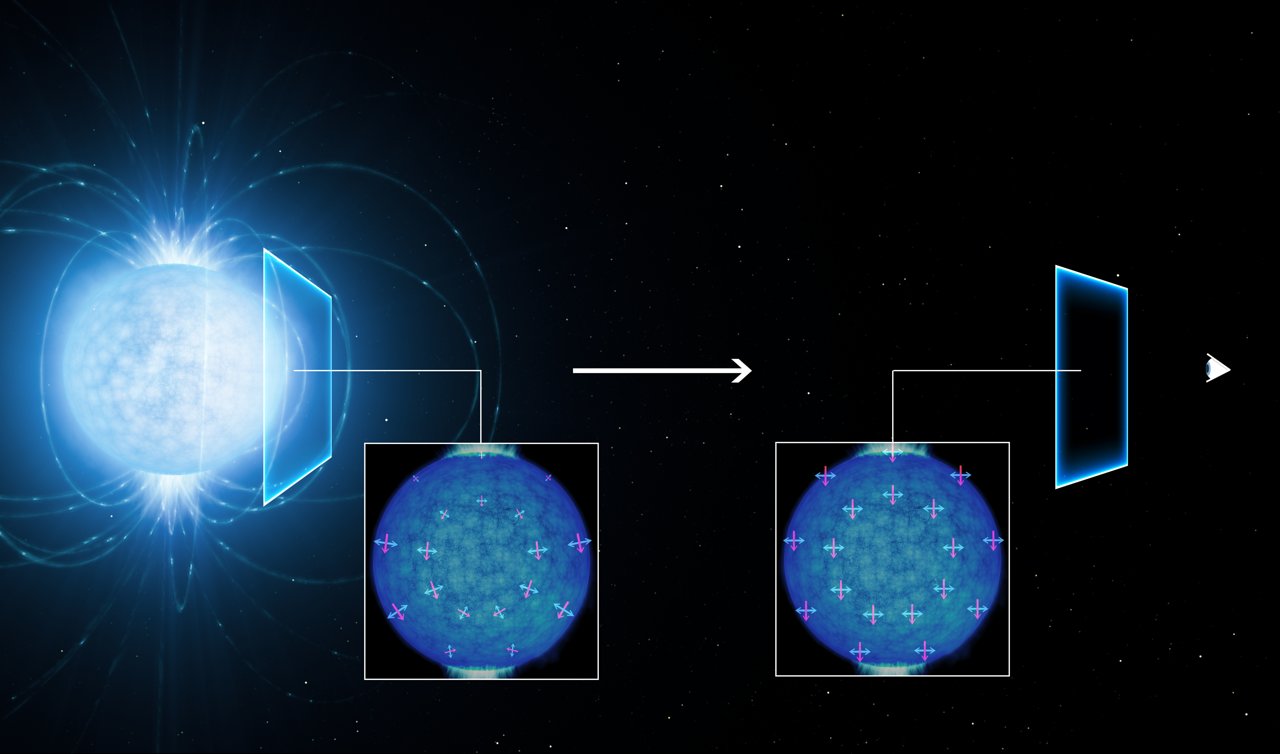 The light from the neutron star becomes linearly polarized as it moves through the highly magnetized vacuum. ESO/L. Calçada

The observations, which will be published in the Monthly Notices of the Royal Astronomical Society and are available online, were only possible due to the incredible capabilities of the VLT. The telescope detected the relative dimness of the neutron star, allowing astronomers to observe the changes in light direction – known as polarization.

“This VLT study is the very first observational support for predictions of these kinds of QED effects arising in extremely strong magnetic fields,” remarked Silvia Zane of the Mullard Space Science Laboratory.

The analysis shows that the light from the star has a polarization degree of about 16 percent, which can only be explained by a strong interaction between the empty space around the star and its magnetic field.

"The high linear polarization that we measured with the VLT can’t be easily explained by our models unless the vacuum birefringence effects predicted by QED are included," adds Mignani.

Future telescopes, like the European Extremely Large Telescope, will be powerful enough to detect this effect around many other neutron stars, making these phenomenal objects a testing ground for extreme quantum mechanics effects.