We've all heard horror stories about people getting into hot water at work over their social media use. That being said – if you found out you'd just got your dream job, you'd be pretty excited, right?

Last week, one twitterer found out she had won an internship at NASA. Understandably overjoyed, she took to social media to announce her good news. And, because this was Twitter, she did so using the proper syntax and vocabulary of the pervading culture.

In other words, she tweeted this:

Not everybody who saw this 61-character celebration shared her uninhibited enthusiasm, however. One commenter, apparently upset by the tweet's R-rated exclamation, sent a one-word reply: "Language."

Unimpressed, the imminent intern shot back a somewhat earthy reply. 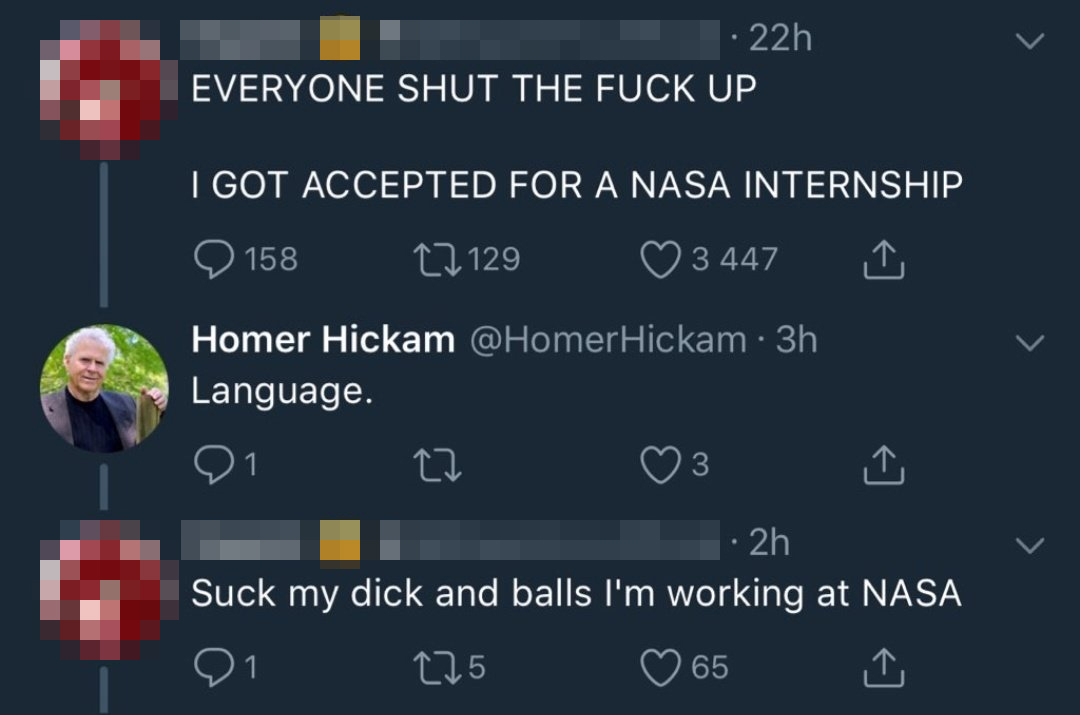 Wait, what does that say?

Homer Hickam is kind of a big deal. A NASA aeronautical engineer for nearly two decades, Homer's the guy who literally trained astronauts for spacewalks. His resume includes the Hubble Space Telescope deployment, the joint US-Japanese mission Spacelab-J, and a little project you might have heard of called the International Space Station.

But if you didn't recognize his name, he's happy to introduce himself.

Yes, in a scene pulled directly from your nightmares, the jubilant poster had unwittingly tweeted obscenities at her brand-new boss.

The situation may still have been salvageable, however – had certain other twitizens not found the conversation. The thread exploded.

Some people scolded the soon-to-be NASA employee for a lack of professionalism, or derided her for apparently not knowing who she was talking to. Others felt that Hickam had acted inappropriately by publically "pulling rank" against an overexcited not-even-intern – pointing out that someone's language, professional or not, doesn't necessarily reflect anything about their engineering skills.

And some, on both sides, started alerting official NASA accounts to the conversation.

After dozens of people bombarded the conversation with ugly, cruel, or just plain rude messages towards Hickam, it came to light that the now-infamous internship had been revoked. 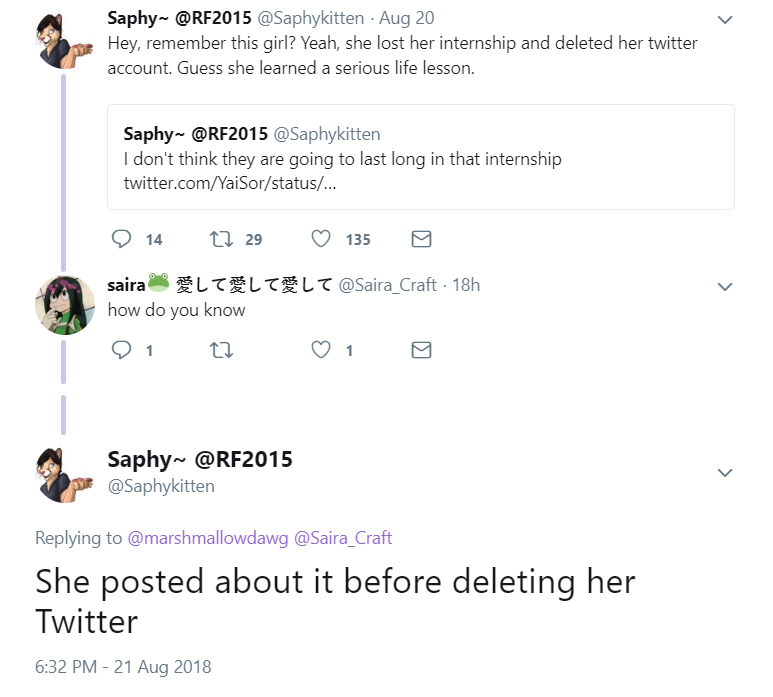 Depending on your point of view, you probably either think this is an unreasonably harsh punishment against an excited ingénue betrayed by online saboteurs, or a predictable consequence for someone who should have known better how to behave around her employers. Either way, it seems like a fitting end to a dramatic story.

But it's not over yet.

On August 21, Hickam published a blog post clearing up some of the confusion surrounding the situation.

"I'm a Vietnam vet and not at all offended by the F-word. However, when I saw NASA and the word used together, it occurred to me that this young person might get in trouble if NASA saw it so I tweeted to her one word: 'Language' and intended to leave it at that," he wrote. "Soon, her friends took umbrage and said a lot of unkind things but long after I was gone as I immediately deleted my comments and blocked all concerned."

Despite the online abuse he had received, Hickam explained that he had nothing to do with the lost internship. "I do not hire and fire at the agency or have any say on employment whatsoever," he wrote, explaining that "the NASA hashtag her friends used... called the agency's attention to it long after my comments were gone."

And for those of you worried about the original tweeter's future career plans, Hickam has proven there's hope even for the most impetuous of social media users.

"After talking to her and looking at her resume, I am certain she deserves a position in the aerospace industry and I'm doing all I can to secure her one that will be better than she lost," he wrote. "I have also... made absolutely certain that there will be no black mark on her record. [NASA] have told me she may reapply."