Is there anything that gives Bill Gates – the world’s ultimate optimist – pause, doubt, or cause for pessimism? After a longer pause than usual, perhaps as he considered his choice of words, Gates gave a typically measured response. “Today, you have certain countries thinking about their own problems.”

Speaking of a peculiarly pervasive “paradigm,” one that “suggests we shouldn’t care as much about what’s happening in other places around the world,” he told IFLScience during a phone call earlier this month: “I do see trends along those lines that do concern me because, well, we’re all in this together.”

“All life has equal value, right?”

Five years ago, the Bill & Melinda Gates Foundation (BMGF) held a gathering in London to talk about the fight against disease. Unlike malaria or cancer, they spoke of illnesses that you’ve probably never heard of, because you’re lucky to live in countries healthy and wealthy enough to not be ravaged by them.

You’re almost certainly never going to suffer through an excruciating removal of a parasitic Guinea worm, or have your skin warped by lymphatic filariasis (LF), more commonly known as elephantiasis. These so-called “neglected tropical diseases”, however, affect the lives of 2 billion people around the world in low-income countries across Africa, Asia, and South America.

Leading a landmark initiative – alongside the World Health Organization (WHO), several governments, the world’s most powerful pharmaceutical companies, charities like The END Fund, and the World Bank – the BMGF aimed to eliminate in some form or another 10 of these neglected tropical diseases, or NTDs, by 2020.

Bill Gates talks about some of the NTDs targeted for eradication. thegatesnotes via YouTube

“At the London Declaration five years ago, we had an idea,” Julie Jacobson, the senior program officer for Infectious Diseases in The BMGF’s Global Health Program, told IFLScience on a separate call. “We knew that none of us could make amazing things happen for billions of people by ourselves, but that together, we could do something remarkable – even if we weren’t exactly sure what it would look like.”

The Avengers of the medical world set to work, fueled by a massive $785 million fund, of which the Gates Foundation was the largest donor. Treatments were rolled out across the low-income world, R&D picked up its game, and support networks with local communities began to thrive.

Five years on, just this week, they met again in Geneva to see how far they’ve come – and boy, how things have changed.

“For every one of these, the trend is down. Less people are suffering from every single one of these diseases,” Gates points out. “Our understanding is dramatically better today than it was five years ago. This is global health at its best.”

As remarkable as all this progress seems, Gates told us that “it’s pretty much what we expected.”

“We haven’t met every ambitious objective we’ve set, but in every disease, the burden is down, the number of countries affected is down… assuming the donor commitment maintains strong, particularly from our two biggest donors – the US and the UK – then we’re on track.”

Speaking of which, governments and private donors have just pledged an additional $812 million in order to boost the efforts of the London Declaration at the Geneva summit. 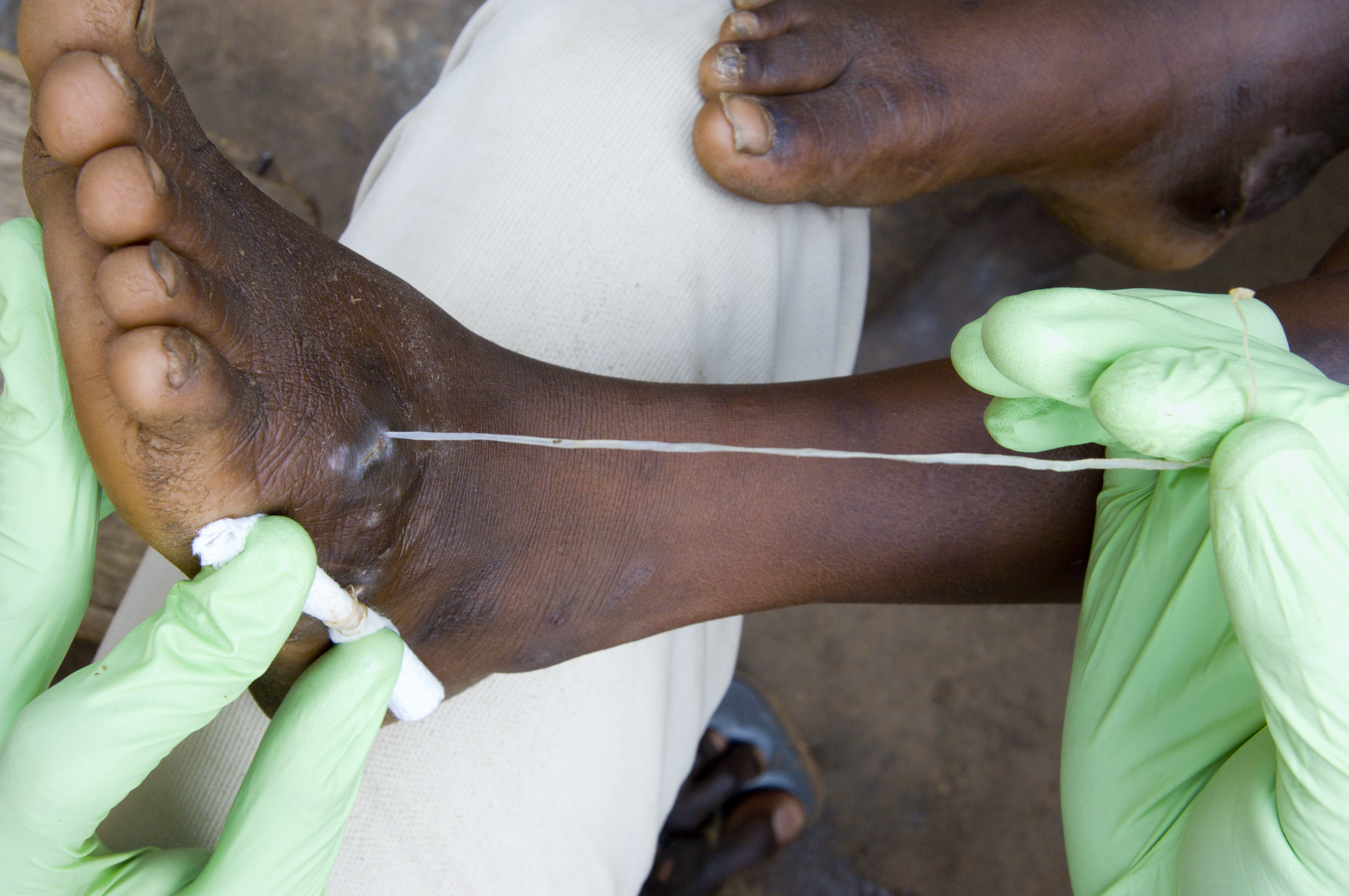 The removal of a Guinea worm. The Carter Center

As well as demonstrating to governments and donors that their efforts are paying off, raising awareness with the general public is also a key feature of the Geneva summit.

“If you’re infected by the loa loa parasite, you have so many worms that swim in your blood that if you put a drop of blood on a slide, the blood can move,” Jacobson explains.

“Guinea worm is pretty horrific too,” she adds. “You know, pulling a three-foot-long worm slowly out of your flesh, and painfully… you know, no one wants to have that.” As there is no vaccine or drug available that can treat this, the Foundation focuses on a decidedly cost-effective, low-tech solution.

“Guinea worm is the poster child for zero technology. You just take a matchstick, and you start to slowly roll the worm out over what could be weeks. Our technology, I guess, is a matchstick.”

“We try not to gross people out too much,” Gates notes. “But the best way for people to understand the scale of these diseases is to visit the countries themselves.”

Their PR assault appears to be working – more people are aware of the plight of NTDs than ever before, and never has the scale of the philanthropy been so high, nor the science been so cutting-edge.

Gates mentions new, easily programmable inoculations called “DNA-RNA vaccines”. If their development is successful, it will make it easier to create new vaccines.

“You could engineer something up in a year or less, rather than the typical five years that it takes today,” Gates told us, noting that we are only three years away from the first of their kind being shipped out for clinical use.

“These drugs and treatments even have side effects that are good,” Jacobson explained. “The drugs for LF, for example, also treats intestinal worms. Some get rid of people’s scabies, and people are really happy, as you can imagine.”

“These are really solvable problems, in a world where we have a whole bunch of things that don’t seem solvable,” Jacobson added. “Thankfully, we’re getting down to the very last cases with these diseases.”

“But boy, we have a long way to go. We’re going to have to be even more creative, and work more closely together.” 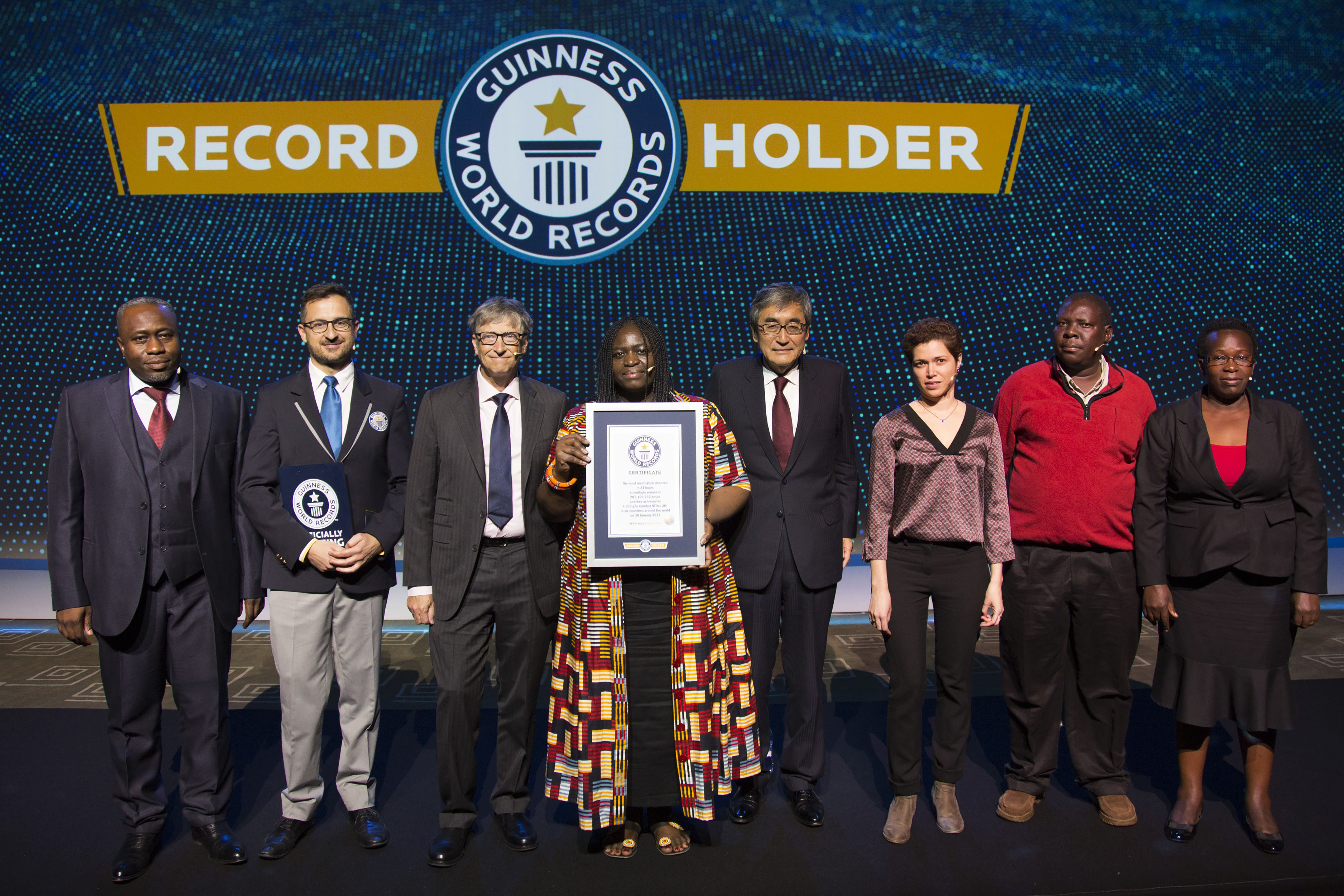 Implicitly voicing “concern” at the outbursts of isolationism cropping up in the West, Gates also said that people and governments must think globally, not just nationally.

“One element of optimism that has driven the very rapid progress is the idea of countries working together,” he notes. “If you want to avoid pandemics coming to rich countries, you should improve health and have good health systems so they can be spotted and stopped anywhere in the world.”

“If you want to avoid mass migration, you should try and create stability in other parts of the world. If you want to help the economy, lifting these countries up to participate is of great value,” he said.

Say you donated a dollar – a single dollar – to vaccination programs abroad. That will directly translate into $44-worth of profit. Parents no longer have to take time off work to look after their child, so they can continue contributing to the economy.

“Of course,” Gates hastened to add, “there are purely humanitarian reasons for these things too.”

As we noted last time we spoke, this profound and relentless optimism can be found throughout all of the Foundation’s work. The pervading message across all fields is, essentially, “chin up, everyone – the world is doing a lot better than you think it is.”

The BMGF and its allies have some unbelievable stats to back their outlook up, best summarized by one simple yet breathtaking metric: More than 122 million children’s lives have been saved since 1990. This is largely thanks to the fact that 86 percent of kids worldwide receive basic vaccination packages these days.

The combined powers of science and philanthropy make for the most practical kind of benevolence there is. Importantly, even the very smallest donation makes a massive difference, especially when it comes to eradicating diseases.

“Anybody – a first-grader – could, with 50 cents, change a person’s life for a year,” Jacobson told us.

“For 50 cents you can treat or prevent seven of these neglected diseases for an entire year,” she added. Do that for a couple of years, and a community will “never have transmission again. It’s gone from the community forever.” 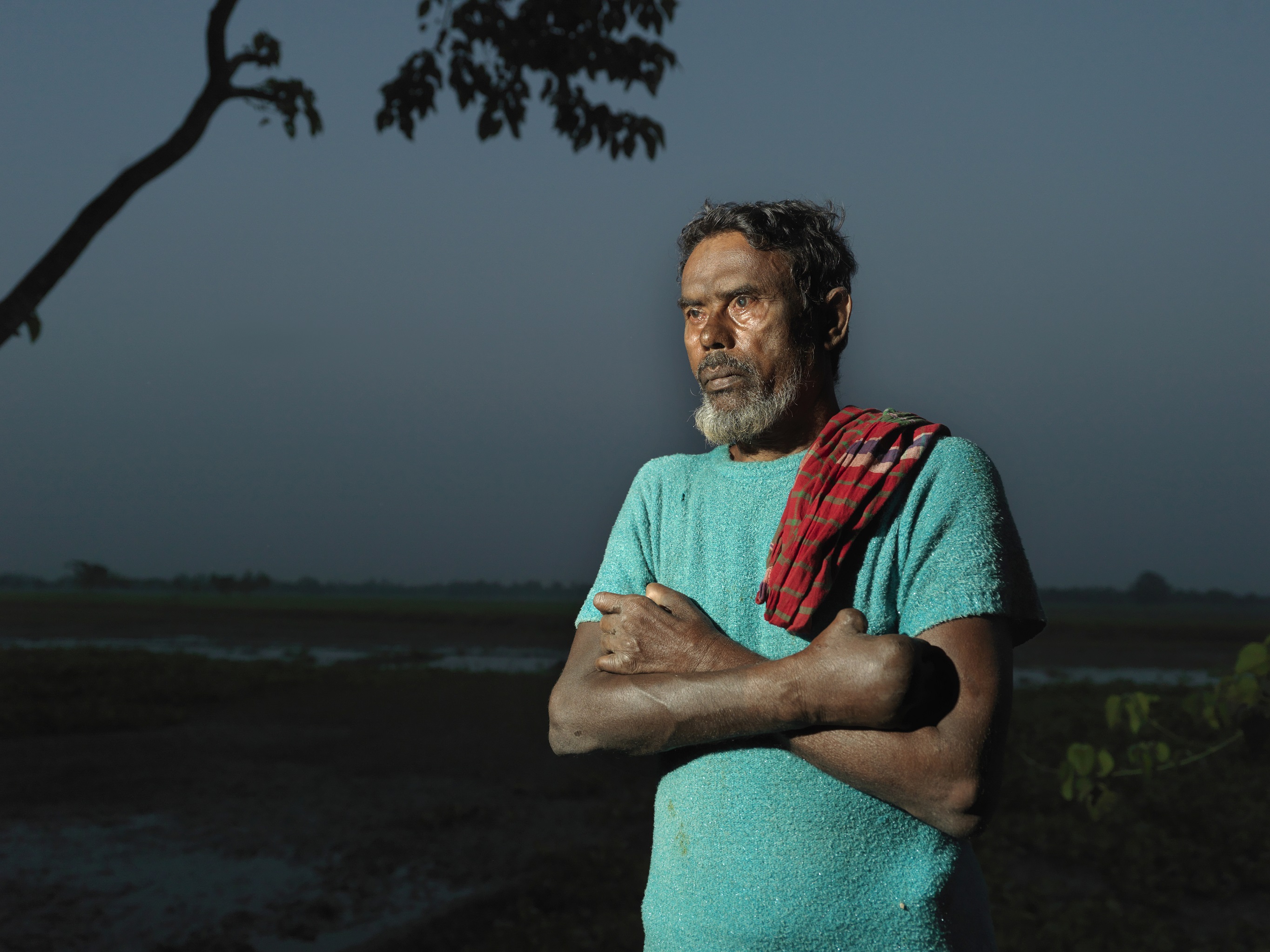 Leprosy still ravages parts of the low-income world, including in parts of Bangladesh. Peter Caton

Once again, the practical, tangible goals of this work comes to the fore. “This isn’t some lofty, crazy goal that no one can be a part of,” she adds. “Everyone can participate in this amazing thing of getting rid of these diseases of poverty. There’s a story in that that we need to share. As a global planet, we need positive things to show we can be part of constructive change.”

Turning to the current US government – one that’s shown a heavy disdain for science, science funding, and overseas aid – Gates, as ever, remained positive, even as Trump aims to slash the National Institutes of Health (NIH) budget to historically low levels.

“It’s a budget we count on for all sorts of medical miracles, like curing Alzheimer’s and obesity and all sorts of things,” he said. “I’m hopeful that Congress won’t choose to make that cut; in fact, I’m somewhat optimistic that they won’t.”

He points out that the last bipartisan bill to pass Congress was the 21st Century Cures Act. This included an NIH funding boost, a landmark mental health care reform, and boosts to drug development and administration.

The primary reason more kids are alive today past their fifth birthday. BMGF

Although some thought the bill gave pharmaceutical companies too much leeway, it otherwise passed the Senate with a huge majority. Gates is clearly wary about what Congress may decide to do this year – “I do find myself having to explain why the aid budget should be a priority when some of the political trends seem to go against that,” he said.

He’s particularly concerned that cutting the overseas aid budget is on the agenda – but whatever happens, he still expects “huge advances” to be made in the medical field. Either way, Gates maintains that philanthropy will always be there to give humanity a helping hand.

Indubitably, this is something we can all be thankful for. As a direct result of initiatives like the London Declaration, millions of lives will be salvaged from a dark future, or no future at all.

“All the pieces are in place,” Gates concluded at the end of our call. “Time is on our side on this one.” 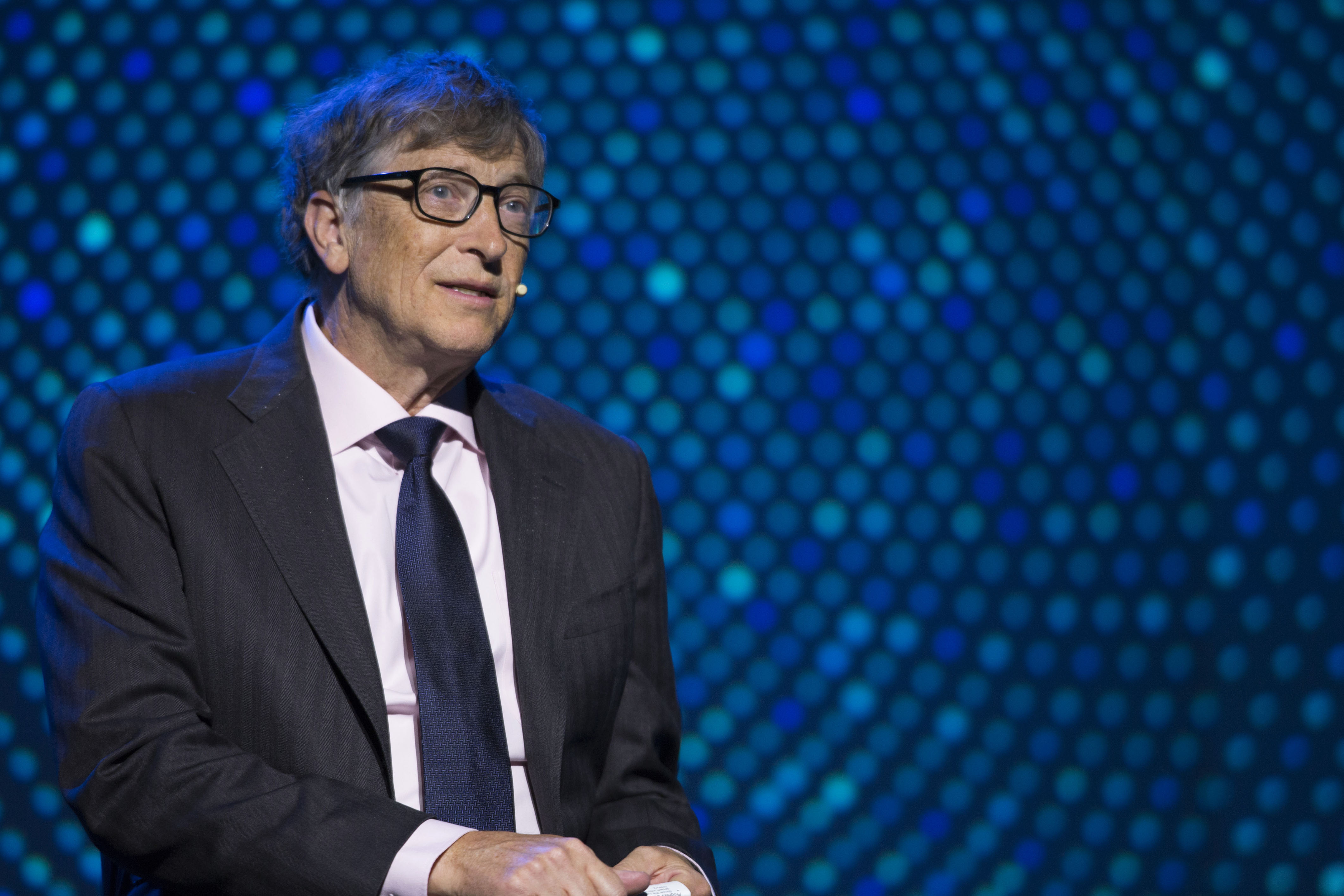